Like the Wind: At 3rd level, a stormbringer barbarian gains a 10-foot increase in speed, so long as they do not wear armor and are not encumbered. (They can still use a shield and retain this ability’s effect.)

Storm Surge: At 3rd level, a raging stormbringer can make a melee attack as a bonus action after using the Dash action.

Gale Force: At 6th level, a raging stormbringer deals double damage to structures and objects, and creatures have disadvantage on any Strength or Dexterity checks to resist being disarmed, tripped, or forcibly moved by the stormbringer.

Ride the Lightning: At 10th level, a stormbringer reduces the damage they suffer from lightning-based spells and effects by an amount equal to their barbarian level. If this lowers the damage to zero, the barbarian can immediately heal 1d12 hit points or remove one level of exhaustion.

Blood and Thunder: While raging, a 14th-level stormbringer deals lightning damage equal to their rage damage bonus to all creatures adjacent to them. The stormbringer can choose to end their rage to unleash a thunderwave as a standard action (as the spell, caster level equal to the number of rounds the barbarian has been raging). 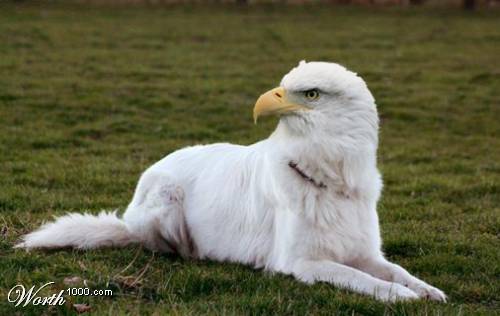 A small flightless relative of the griffin and hippogriff, the cynogriff resembles a large wild dog with the head of a bird of prey. Cynogriffs are most commonly found in temperate forests, but there are some species found in warmer, or colder, environments.

If training begins as a chick, a cynogriff can be tamed; viable eggs fetch a high price on the exotic animal market.

Keen Sight: The cynogriff has advantage on Wisdom (Perception) checks that rely on sight.

Arboreal: When calculating falling damage, reduce the height the cynogriff fell by 10 feet. Also, the cynogriff has advantage on Dexterity saving throws to prevent itself from falling or being pushed over ledges.

Death from Above: The cynogriff drops down on a creature from a height of at least 10 ft. The target must succeed a DC 12 Dexterity saving throw or be knocked prone. If the target is prone, the cynogriff can make one bite attack and one talon attack.