“If there’s one thing you can say about mankind,
There’s nothing kind about man.”
– Tom Waits, Misery Is the River of the World

While the unclaimed territories teem with strange beasts and unknown terrors, the danger travelers most often encounter will be their fellow humans.

A good way to populate seedy bars or add some spice to a bad guy’s gang. Player-characters could hire them as retainers, but these assholes will betray them at the first hint of a better offer.

Cheap Shot: Craven brigands add 1d6 bonus damage to attacks made with advantage.
Take the Money and Run: As a standard action, or a bonus action after a critical hit, a craven brigand can attempt an opposed Dexterity check against an adjacent target. On a success, the brigand steals a random item from the target and can move up to their speed.

1 – 4: 1d6 copper coins, 1d4 silver coins
5 – 6: half a bottle of rotgut booze
7: crumpled and creased letter from a loved one imploring them to come home
8: minor trinket worth 2d10 gold pieces

Terrible Swift Sword: The zealot can make an extra number of attacks equal to their hit dice, against the same or different targets within range.
God Wills It!: When an attack would reduce the zealot to 0 hit points, roll 1d20. If the result is 11 or higher, the zealot drops to 1 hit point instead. Each subsequent time the zealot drop to 0 hp, the target number to beat increases by 1.

Like a Cornered Beast: A feral woodsman gains advantage on attack rolls when they have less than half their total hit points.
Hunter’s Horn: Once per day, a feral woodsman can summon 1d4 feral woodsmen with 1 hit die each. They arrive 1d4-1 turns after the summoning.
Once a Man…: Feral woodsmen have advantage on Wisdom checks to resist mind-affecting spells and abilities

None Shall Pass: A creature hit by the warden’s melee attack must succeed a Strength check or be unable to move until the end of the agent’s next turn. On a critical hit, the agent’s target is automatically knocked prone.
I am the Law!: As their action, a crooked road warden can attempt to impose their will on their opponents. Each creature that the agent can see and can hear them must succeed a Charisma check or suffer disadvantage on attacks against the warden for the rest of the encounter. 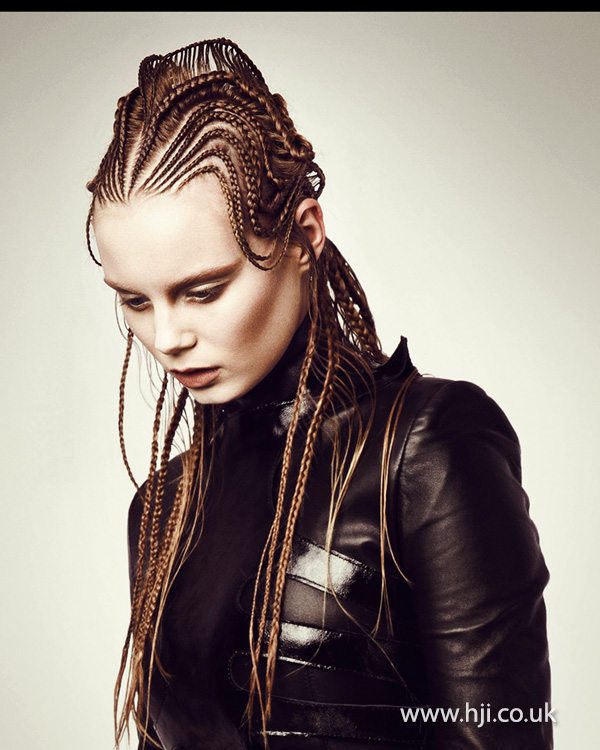 Coils of Darkness: As their action, a priest can summon shadowy tendrils to confine one target they can see per hit die. Targets must succeed a Strength or Dexterity check or become restrained.
Fade to Black: For a total number of rounds per day equal to their hit dice, a priest of shadow can infuse their body with nethereal energy, becoming incorporeal (immune to non-magical sources of damage, able to move through up to 5 feet of solid matter). In low-light conditions, or at night, they are also invisible.
Sight-Stealing Strike: Instead of dealing damage, a priest can choose to blind their target. Unless the target succeeds a Wisdom check, they are unable to see for a number of rounds equal to the priest’s hit dice.

1: Blacker than black silk scarf with subtle black print (worth at least 100 gold pieces).
2: Plain mask made of white material that feels like porcelain but is harder than steel.
3: Black velvet pouch contain 1d4+1 cut black stones, each worth 1d4x10 gold pieces.
4: Vial of what appears to be black ink. When exposed to air, the liquid turns into a cloud of impenetrable black fog (as the spell darkness).
5: Ring made from coil of silver and black metal wires (1-in-10 chances of enchantment).
6: Shadow cult codex written in silver ink on black pages. A priest of shadow will go to extreme lengths to reclaim it.
7: Silver wire-frame spectacles with lens of smoked glass (worth 1 gold piece).
8: A flask of sweet, dark liqueur and a box of glossy petit fours. If a creature consumes either of them, they must succeed a Wisdom check or fall into an unwakeable sleep for 1d4 hours.

illustration by Don Greer, from “Down in the Dungeon.”

Hideous Strength: The knight deals extra melee damage equal to their hit dice. A creature struck by a knight’s melee attack is pushed back 5 feet.
Vitriol: The knight can spit a glob of toxic saliva (1d6 damage, 30 foot range).
With My Last Breath, I Spit at Thee: The knight makes a free attack against the creature that drops it 0 hit points; if the attack hits and deals damage, the target must succeed a Wisdom check or become cursed.

1-3: A well-used misericorde dagger.
4-6: Tattered and soiled banner of a defunct knightly order
7-8: Dog-eared manual of chivalrous conduct
9: Gold signet ring bearing the crest of an extinct noble house
10: Silver locket with an engraved picture of a young woman inside

Barbed Arrows: A creature who takes damage from ranged attack gain disadvantage on attack rolls -or- halved movement until arrow removed (deals 1d6 additional damage when pulled out).
Trick Shot: Instead of dealing damage, can use ranged attack to disarm, trip, or pin target.

1-3: 1d12 barbed arrowheads
4-5: Philosophical treatise; a character that reads it for at least one hour and succeeds an Intelligence check gains advantage against fear-based spells and effects for 24 hours.
6-7: Ornate lacquered case containing a single arrow with jet-black fletching.
8: Silver filigree brooch shaped like an insect with emeralds for eyes (worth 1d6x10 gold pieces)

costume by Colby Vincent Edwards, for “The Eighth Day”

1: Creepy corn-husk dolly with a lock of human hair inside.
2: leather pouch of 2d12 divinatory knuckle-bones
3: Glass jar full of (roll 1d6): 1-3 – moonshine, 4 – pickled eggs, 5 – swamp water and leeches, 6 – eyeballs
4: Flute made from a thigh bone
5: Candle made from human fat, burns with a blue flame; while lit, it reveals hidden doors and traps within a 15-foot radius
6: Goblet made from human skull
7: 2d10 blow darts and a waxy lump of poison
8: Ceremonial pipe and hallucinogenic herb mixture
9: Grimoire bound in human skin
10: Amulet containing mixture of salt and iron filings; once per day, the wearer can automatically succeed an attempt to resist possession or mind-control.

illustration by Oz To

Haelingas
Utterly ancient, kept alive by the power of the sentient sword Brightbane that holds him in thrall. Can burn spell slots to summon the shades of beings slain by the sword to assist him in battle. Cannot refuse a challenge of single combat.

Akimu Mugulaji
A courtier and diplomat with impeccable taste. Blind since birth, he employs spells of scrying and concealment to disadvantage his adversaries. Visual magical effects will always involve a shade of purple.

Melucida Pontrefax
Grew up on the streets, has numerous underground and criminal contacts. Casts spells out of a purloined grimoire.

Duard Estroy-Pleck
Failed attempt at lichdom left his consciousness in the body of a cat. Uses his imperfectly mummified body as a familiar.

Brindel Hargasp
Half-human daughter of an infernal duke. Not evil, but her idea of socially acceptable behavior is a little warped. Her favorite spell is umbral talons.

Peyonna Aduwathé
A spell-casting prodigy still in her teens. Has very little patience for people not as intelligent as she (basically everyone). Her technique is flawless, but she lacks practical experience.

Senrautha
A steely-eyed master of esoteric fire magic. Has an epic tolerance for alcohol and loves a good drinking game.

Devised by disciples of Storza the Furious, this spell summons a replica of that infamous war-mage’s signature weapon.

Upon completion of the spell, a lightning bolt stabs down from the sky into the outstretched hand of the caster and coalesces into a two-handed sword. The caster is considered to be proficient with the storm blade and can use their Intelligence modifier instead of their Strength modifier for attack rolls with it.

The storm blade is considered a magical, cold iron weapon for the purposes of penetrating damage resistance/reduction. It deals a critical hit on a natural 19-20.

Once summoned, the sword remains for 1 minute plus 1 round per level of the caster, or until dismissed by the caster. Also, the caster can end the spell early by hurling the sword like a javelin, which transforms the weapon into a bolt of lightning that deals 1d6 points of damage per caster level to any creature in the bolt’s path that fails a Dexterity saving throw.

1 – A garbled incantation causes blade storm to be cast instead. For one round per caster level, shards of iron rain from the sky, dealing 1d6 damage per round to everything in a 100-foot radius centered on the caster.

2 – Instead of forming into a blade, the lightning courses through and out of the caster’s body in a conical area 15 feet wide and 10 feet per caster level long. Creatures in the area must succeed a Dexterity saving throw or take 1d6 points of damage per caster level.

3 – All creatures wielding manufactured weapons within a 10-foot-per-caster-level radius of the caster must succeed a Wisdom saving throw or their respective weapons will animate and begin attacking their erstwhile owners with an attack bonus equal to the caster’s Intelligence modifier. The effect lasts for one minute.

4 – The caster is paralyzed as the shade of Storza the Furious attempts to possess their body. At the start of each turn, the caster makes a Wisdom saving throw; if they roll three success before rolling three failures, Storza retreats back to the afterworld and the caster can act normally. Otherwise, Storza takes complete control of the caster’s body and runs off to wreak havoc.

5 – A terrible thunderstorm spontaneously appears overhead, affecting a 100-ft radius area centered on the caster. Movement speed and visibility is halved within its area of effect. The size of the storm increases 100 feet per caster level and lasts for 1 hour per caster level. The storm moves with the caster, always keeping them in its center.

6 – The lightning “charges” the caster with electricity, expressed as a number of d6s equal to the caster’s level. As a standard action, the caster can release the electricity as a touch or ranged attack doing damage in increments of 1d6. In any round the caster does not discharge any of the energy, they take 1d6 damage and lose 1 die of charge.