Make contact with an extra-dimensional intelligence to ask one question per caster level. The spell renders the entity’s responses in a language in which the caster is fluent, but it is up to the character to parse the meaning of the messages.

Prolonged exposure to so alien a mind becomes increasingly dangerous. Starting with the second question asked, the caster must make an Intelligence saving throw with a difficulty that increases by one for each question. On a failed save, the spell miscasts.

1 – The caster is physiologically and psychologically incapable of withstanding the alien intelligence – they die screaming as their brain melts out of their ears and nose.

3 – The answer completely upends the caster’s worldview – their alignment shifts to the diametrically opposite viewpoint. (If neutral, randomly choose the new alignment).

4 – The entity is curious about existence in this primitive dimension – for one hour (plus one hour per additional question asked) the caster’s body is hijacked by the alien intelligence.

5 – The caster’s mind is temporarily amplified – their Intelligence score is raised to 19 for one round per caster level.

6 – The caster should feel sincerely honored – the entity they contacted has chosen them to be its emissary in this dimension. The caster is indelibly marked in some way (consult your favorite table of random cosmetic mutations). From time to time, the entity will contact the caster to transmit its latest instructions. During this communion, which lasts 1d10 rounds, the caster is incapacitated.

from “When the Party’s Over,” by Billie Eilish

This spell can only affect creatures with an Intelligence score of at least 3 and are capable of feeling emotions. If the target of the spell fails a Charisma saving throw, they begin weeping black fluid as they are overwhelmed with feelings of intense sadness and self-loathing.

For a number of rounds equal to the spellcaster’s level, an affected target must make a Wisdom saving throw at the start of their turn to attempt to muster the motivation to act. If the succeed, they act as normal, but all rolls are made with Disadvantage. If the target fails the Wisdom save, they are essentially incapacitated.

The spellcaster can affect more than one creature by reducing the duration one round for every target added.

1 – Starting with the veins around their eyes, all the blood vessels in the caster’s body become visible and blackened. For a number of hours equal to their level, the caster gains Advantage on rolls to resist spells and effects that manipulate their emotions, but their Charisma score is reduced by 2. At the end of the duration, the caster must succeed a Wisdom saving throw or the effect becomes permanent.

2 – The caster becomes acutely sensitive to failure. For a number of hours equal to their level, the caster will burst into tears and become inconsolable for 1d4 rounds whenever they fail an attempted action.

3 – The target’s eyes turn pure black and they lose all affect. For a number of rounds equal to the caster’s level, the creature is immune to all spells and effects that manipulate or elicit emotions. When the spell’s duration ends, the target must succeed a Charisma saving throw or the effect is permanent.

4 – The caster begins weeping a viscous, caustic black fluid for a number of rounds equal to their level. Each round, they secrete enough to fill a standard vial.

5 – The spell begins converting the target into tarry sludge, every round it must make a Constitution saving throw – if successful they suffer 1d4 points of damage and may act normally; if they fail they suffer 1d6 points of damage per level of the spellcaster. If they make three successful saving throws, the spell is broken. If the target drops to 0 HP, they are transformed into an aggressive black slime with an equivalent number of hit dice.

Level 6: Iron Body
As a reaction to taking damage, you can expend 1 ki point to halve the damage taken.

Level 11: Fanged Fist
When you use stunning fist, the target is paralyzed instead of stunned. Whenever an enemy creature misses with a melee attack while you are using patient defense, they take damage equal to your unarmed strike

Level 17: Deadly Flurry
So long as you have at least 1 ki point, you lower the threshold for a critical hit with unarmed strikes against a single target by a value equal to the number of successful unarmed strikes you’ve already made against the target. This ability resets after you make a critical hit or strike a different target.

The spellcaster accumulates the moisture present in the air around them and freezes it, creating jagged ice crystals to be hurled like daggers.

The spell creates a number of projectiles equal to the caster’s level; they have a maximum range of 30 feet plus 10 feet per caster level. Each projectile deals 1d4 points of damage and the caster can direct them at the same or different targets within range. A target can avoid projectiles with a successful Dexterity check, but suffers a penalty to the check for every projectile targeting it.

1 – The caster’s teeth turn to ice and shatter in their mouth. They suffer 1d4 damage and lose 1 point of Charisma.

2 – Moisture freezes to the caster’s body, creating a thin shell of ice. The caster moves at half-speed, but the ice will absorb 1 point of damage per caster level before shattering.

3 – The moisture condenses into a single, gigantic shard of ice that flies toward a random target within range. If the target fails their Dexterity check, the ice shard freezes them solid.

4 – After 1d4-1 rounds, the caster experiences excruciating pain in their mouth and jaw. Then, their teeth begin falling out, one per round for a number of rounds equal to their level. These teeth will feel abnormally cold; when thrown, they shatter on impact, coating everything in a 10 foot by 10 foot square with slippery hoarfrost.

5 – Teeth spontaneously sprout from the caster’s skin, covering their entire body. The caster gains a natural Armor Class equivalent to wearing chain mail, but their Charisma drops to 3. After a number of rounds equal to their level, the caster must make a saving throw versus magic; if they fail, the effect is permanent. Otherwise the teeth fall out and their Charisma returns to normal. 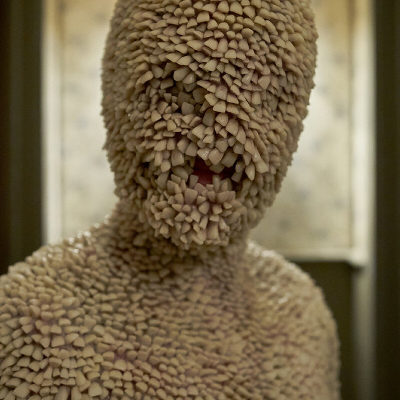 6 – The casters teeth become translucent and blue, like glacial ice. They gain a bite attack that does 1d4 damage, plus another 1d4 damage each round as ice spreads out from the bite wound. On their turn, the bitten creature can make a Constitution check; with a success, they only lose 1 hit point and the ice doesn’t spread. After three successful checks, the spreading ice effect ends. 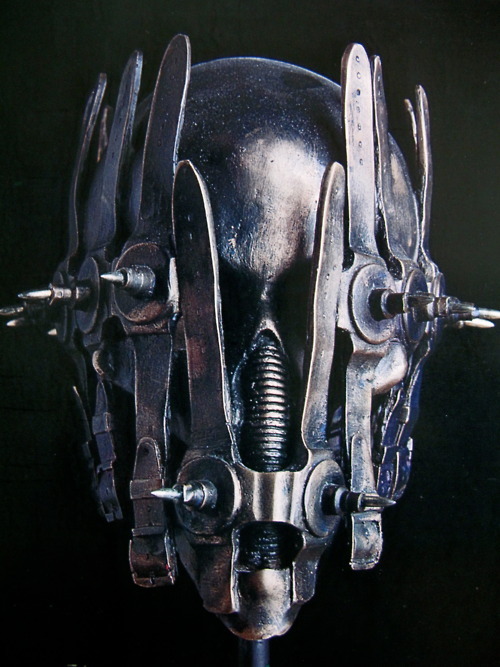 The crown of the mind-tyrant is actually a helmet that fully encloses the wearer’s head.

When a character dons the crown, they lose 1 hit point as internal spikes puncture their skull; this hit point cannot be regained as long as the crown is worn.

While wearing the helmet, a character loses their senses of sight, hearing, and smell, and are unable to speak. However, they become aware of every creature within a 30-foot radius that has an Intelligence score. This awareness extends through up to 5 feet of solid material, although any thickness of lead will block this effect.

The wearer can communicate telepathically with any number of creatures with the helmet’s area of effect. Alternatively, the wearer can focus the helmet’s power to probe the mind of a single target within range. If the target fails a Wisdom check, the wearer of the helmet gains access to its thoughts and memories. Continuous use of the probe is dangerous – on the second round of probing, the target takes 1d4 damage, plus an additional 1d4 points for every subsequent round. While probing a creature, the character wearing the crown loses all awareness of everything but their target.

Wearing the crown is also hazardous. For every hour the helmet is continuously worn, a character’s Wisdom score decreases by 1. At a Wisdom score of 8, the character will refuse to take off the crown and will fight to prevent anyone else from removing it. At 0 Wisdom, the character is effectively dead, their body controlled by the crown itself. 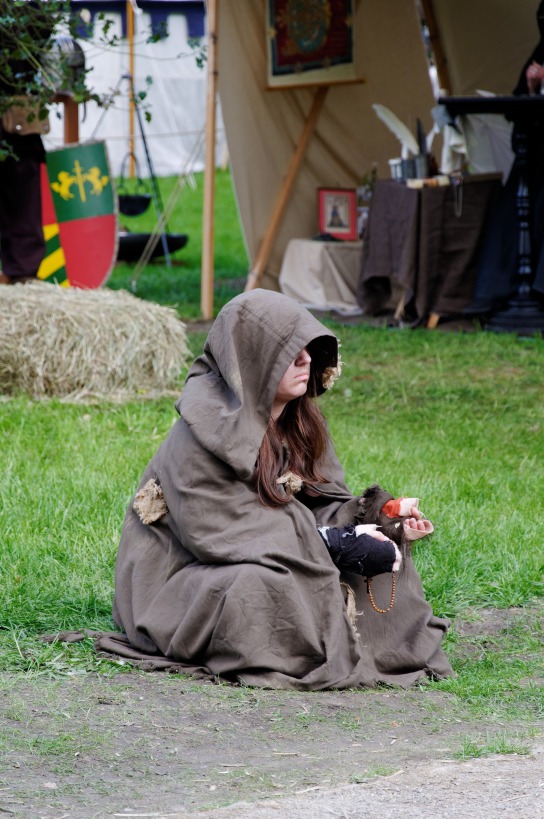 Level 1 – Beneath Notice
All creatures have disadvantage on Insight and Investigation checks against the cleric – they always appear as one of the lowest of the lowly.

Level 2 – Channel Divinity: Comfort the Afflicted, Afflict the Comfortable
By expending a use of channel divinity, a cleric of the wretched domain can remove an ongoing negative condition (blindness, poisoning, curses, etc.) from one creature and transfer it to another. The cleric suffers the effects of the condition until they complete the transferal, which requires a successful touch attack against an unwilling target.

Level 6 – Sin Eater
A cleric of the wretched domain can “absorb” another character’s failed death saving throw, essentially failing it for them. When a cleric takes on a third failed death save, they die regardless of their current number of hit points. Absorbed failures reset after the cleric completes a long rest.

Level 8 – Turn the Other Cheek
As a reaction to taking damage from an attack, a cleric of the wretched domain can expend a use of channel divinity to force the attacker to re-roll the triggering attack with disadvantage.

Level 17 – Rich in Spirit
A cleric of the wretched domain no longer requires food, drink or sleep (though they still require a long rest to restore lost hit points and expended spells and channel divinity). They also take no penalties related to aging or old age, but will still die upon reaching the maximum age from their species.